– On schedule for her spring 2021 delivery

– In build for experienced owners who are closely involved in all aspects of the design, construction, operation and management of the yacht

Following the keel laying in May, construction of the new RSY 38m EXP is on schedule for her spring 2021 delivery with the steel hull almost complete and soon to be joined to her aluminium superstructure.

The decisive and modern exterior lines, interior layout and naval architecture are by Hydro Tec, whereas the refined interior design is by BurdissoCapponi Yachts & Design, a design studio based near Rosetti Superyachts in Ravenna, Italy. The displacement explorer is designed for cruising long distances in total safety and autonomy.

The 38M EXP project is being built for experienced owners who are closely involved in all aspects of the design, construction, operation and management of the yacht. They spend long periods on board, so were looking for a yacht that offered comfort and safety in all conditions.

“The exterior design is a reflection of the yacht’s functionality and reliability, which were the key priorities for the owners,” says Sergio Cutolo, founder of Hydro Tec. “Special attention has also been paid to the crew area and to the hold volumes, both essential requirements for long voyages far from ports or marinas.”

The exterior design is classic in proportion but contemporary in style with tense, angular lines. At the request of owners, the designer has made the windows and openings as large as possible.

The main deck salon, in particular, has large aft windows and sliding doors that offer wide sea views. In addition, two large side sliding doors provide access to the cutaway bulwarks on the side walkways. The space is divided into two main areas: a veranda-style seating area towards the stern and the dining area.

On the starboard side, a custom-designed wine cellar acts as a divider between the guest areas and the owner’s stateroom, which is spacious and well distributed with a fixed side balcony accessible through a sliding glass door. The clients chose this solution because it can be used without requiring help from the crew, thus ensuring greater privacy.

On the lower deck are four guest cabins (two doubles and two twin singles) that are comfortably generous in size and well appointed.

The upper deck lounge is served by a service pantry and the integrated bridge is equipped with a large office area and adjacent captain’s cabin.

The sun deck is very wide and hosts a large dining table as well as a corner bar with high stools, Jacuzzi with waterfall feature, and two showers on the sides. The area is protected forward by a sliding windbreak door.

The forward area on the lower deck includes laundry, ironing room and storage space accessible directly from the crew quarters.

The interior design stems from the close collaboration and synergy with the owners, who clearly expressed their tastes and requirements from the very beginning.

“Following the initial meetings, it became evident that the staircase would become the centrepiece of the project as the central functional and stylistic core with a character that is carried throughout the whole interior,” comment BurdissoCapponi Yachts & Design.  “In fact, the stairway is conceived as an architectural base that becomes a recurring element of the project, as does the interplay of white lacquer, light and dark woods.”

Alcoves and niches on board have been created on request of the owners to house various works of art. The lighting design is an essential element of the interior design.  The general lighting is linear and diffused, whereas the task lighting is more focused with cones of light that provide functional lighting that also enhances the space. 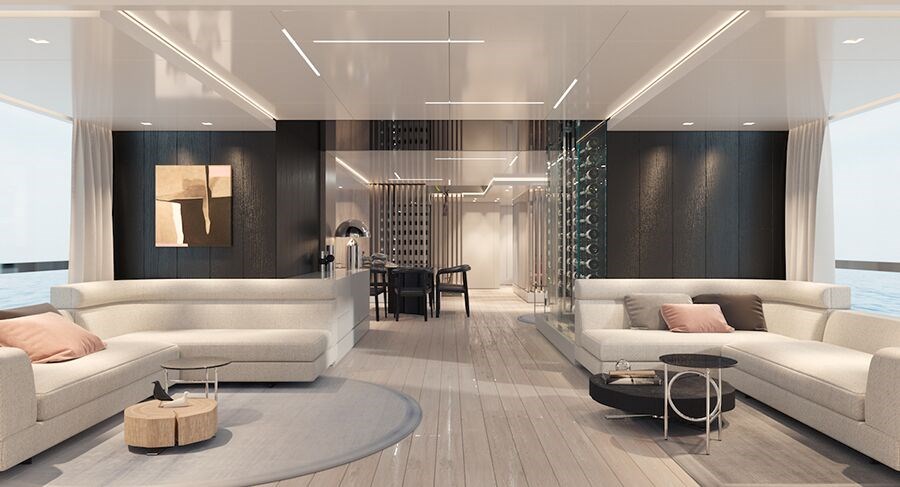 The round-bilge, displacement hull with bulbous bow, broad and flat stern sections and extended skeg has been optimised to cruise at between 10 and 11 knots.

The yacht is equipped with electric fin stabilisers to reduce the noise levels as much as possible at anchor. It is also equipped with a powerful electric bow thruster and independent rudders for maximum manoeuvrability in restricted areas.

A central tunnel at under lower deck level provides direct passage from the crew quarters to the engine room as well as easy access to the tanks, and allows the inspection of watertight compartments that house the stabiliser fins.

“The 38M EXP fully embodies the philosophy of Rosetti Superyachts, which is to apply the extensive shipbuilding experience of Rosetti Marino to the superyacht sector,” says Fulvio Dodich, RSY CEO and partner. “This experience shines through the project in every detail, from the exterior and interior design to the careful selection of equipment and overall construction quality.”