It has been ten years since the first A85 was presented to the public, marking the introduction of new concept of yacht. During these ten years, ARCADIA YACHTS has gained a starring role on the stage of international yachting, delivering about 30 vessels and always placing Owners and their needs at the heart of every project.

ARCADIA YACHTS celebrates its tenth anniversary with the world debut of the new SHERPA XL at 2019 the Cannes Yachting Festival, confirming the innovative role of the Italian shipyard with features typical of the 85-90 feet segment

FROM “MYSTERIOUS ITEM” TO TREND-SETTER IN 10 YEARS

“ARCADIA YACHTS introduced itself with a concept of motoryacht that stood out from the crowd,” declares Ugo Pellegrino, Sole Director of the Italian shipyard. “It was not just the design and the layout of the interiors, there were also a number of solutions that allow guests to enjoy yachting in a different way, closer to the surrounding element, the sea, nature.

The brand’s aim was (and is) a different life style that is more wellness-oriented. A quiet yacht, where there is no need to hold onto something to stand when sailing, a yacht that does not vibrate and on which people can relax on a sofa and enjoy the view… Ten years ago we believed in and worked on a different approach to yachting, in which hurrying should not be a constant. More people have become aware of this, which inevitably leads to saving lots of fuel and, therefore (consciously or otherwise), to considerably reducing the environmental impact.”

From solar panels that allow to reduce generator use when at anchor to the large, thermally insulated windows and the high-efficiency semi-planing hull (which allows to considerably reduce fuel consumption), everything aboard ARCADIA yachts is designed to provide a unique experience of life at sea in close contact with the surrounding environment. ARCADIA YACHTS is still continuing to invest in research and development so that it can always be a leader in the creation of yachts in which sustainability, design, conviviality, safety and ease-of-use are balanced toperfection.

The open areas on every ARCADIA yacht allow to become fully part of the marine environment, while the larger than mainstream players aft-decks unite the yacht and the sea, as if the sea itself were a natural extension of the yacht. The full-height windows, the side openings and the innovative glass panels (which can be lowered and raised like car windows) generate spaces in which the threshold between inside and outside becomes imperceptible, while closed spaces dissolve and are absorbed by the surrounding natural environment.

In ARCADIA yachts, the natural environment is more than just celebrated – it is also, and perhaps most importantly, respected. The large openings limit the use of air conditioning thanks to pleasant sea breezes that can freely blow through the yacht. The solar panels integrated in the top of the yacht reduce generator use, which also allows to better appreciate natural sounds when at anchor.

The use of cutting-edge glass panels with considerable thermal insulation bears witness to the shipyard’s commitment to maintaining its environmental principles. 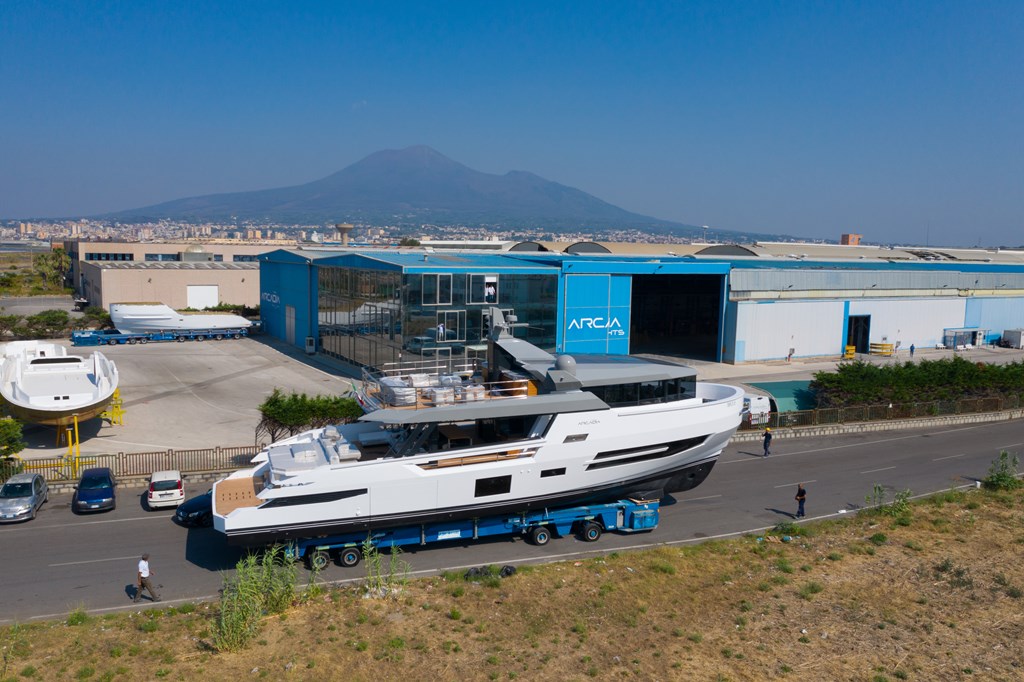 CELEBRATING AN ANNIVERSARY WITH A GREAT WORLD DEBUT

The SHERPA XL (the successor of SHERPA) is another step in the growth process of ARCADIA philosophy, giving life to a new line of yachts next to the historical A line.
The spaces inside the new SHERPA XL efficiently use every inch of the vessel’s 24-metre overall length and (especially) the approx. 7-metre beam, which is greater than the average 6.4 metre beam of yachts in the 85-90 feet category available on the market. This means that the overall living area is 220 square metres inside and outside thanks to the side garage solution.

The concept of the SHERPA XL, developed with the Milan-based Hot Lab design studio (which had previously worked with ARCADIA YACHTS on the interiors of the A105) develops around the arrangement of the decks. The bow decks are staggered, so there is one central staircase with reduced height differences. This unusual layout has permitted to achieve large spaces in a limited height, arranging volumes in unusual ways.

The direct relationship with the sea (which has always been one of the distinguishing traits of ARCADIA philosophy) is enhanced in the cockpit, which is connected to the stern platform by a short set of scenic steps. These steps create an interlocking pattern between the narrow topside and the low volume that supports the sundeck. This large space, nearly 65 square metres in size, is unencumbered and can be enjoyed at any time of the day. The shipyard’s ability to create, forward of the engine room, a side garage large enough to house a tender of 4 metres (or more) in length, means the platform is always clear. This is a considerable advantage in terms of elegance and comfort compared to the currently available items in the 85-90 feet segment.

“The new SHERPA XL is an important step forwards in ARCADIA’s development,” explains Salvatore D’Ambrosi, the shipyard’s Plant Manager. “Considerable attention (in terms of design and testing) was focused on the new side garage system, which is one of a kind in the 85-90ft segment.

It provides clean profiles and allows guests to use the entire yacht at all times.” The topsides along the cockpit have openings that allow guests to fully enjoy the view while relaxing on sofas or sitting at the table (which is large enough to seat eight to ten people in the optional version). The trait d’union between interiors and exteriors, which highlights the relationship with the sea and the surrounding environment, is definitely the skylounge (35 sq.m.), where, thanks to the fully up&down windows, simply touching a button is enough to directly enjoy the sea breeze – the best air conditioning you could wish for.

“When building the SHERPA XL, we further improved our heat insulation system, which is characterised by multi-glazed glass with insulating gas between glass panes”, adds D’Ambrosi. “This technology can be appreciated in the skylounge in particular, which can be fully enjoyed reducing the use of the air conditioning system to a minimum, and sometimes not using it at all.”

The 35 square metre sunlounge in the upper deck has a bar area that stresses the open-air philosophy of the SHERPA XL. This entire area (unlike traditional fly decks with wheelhouse) is dedicated entirely to guests, providing privacy. The regular shape of the sunlounge allows to have multiple solutions with items supplied loose.

SIMPLE GEOMETRIES AT THE SERVICE OF VOLUMES

The strong interaction with the surrounding environment can also be seen in the design of the interiors, which are characterised by sophisticated furniture set in a dry, essential style, with simple geometries that maximise volumes. The available space is used to its full extent and offers the greatest possible comfort when living aboard. Additionally, new construction arrangements have allowed to optimise assembly times and use high-quality furniture. Last but not least, the use of cutting-edge materials has allowed to significantly reduce the overall weight.

Different Owners have different needs, so the SHERPA XL has been designed in a three or four cabin version. In the first, an enclosed galley is in the skylounge, whereas in the three-cabin version it is in the lower deck. In both versions, great care has been given to ensuring an efficient onboard service that is also discreet, by separating the guest areas from the crew service quarters.

There are special pathways reserved for the crew (up to three members), ensuring levels of privacy typically found on larger yachts.
The master cabin is over 22 square metres in size and merges seamlessly with the bathroom.
There are no partitions, so Owners can enjoy a space with a domestic touch – large, open and full of light in particular thanks to panoramic windows in the hull. The VIP cabin in the bow follows the same principle and succeeds in expanding the perceived space in an almost theatrical manner.

HIGHLY EVOLVED HULL AND PROPULSION FOR OVER 1400 MILES OF RANGE

Many technical innovations are in the hull and propulsion system, which were studied jointly to optimise performance in terms of comfort and consumption. The quality of the engineering work carried out on this yacht is certified by the first tests, in which the yacht reached 23kn top speed, consuming approximately 6,5 l/nm at 12kn (with the IPS-1.350 propulsion system). This is almost 30% lower compared to other yachts in the 85-90 feet segment. The estimated range rises to over 1,400 nautical miles at a speed of 10 knots.

To reduce its environmental impact to a minimum by using renewable energy, the SHERPA XL is equipped with solar panels (ARCADIA’s trademark) that ensure 3 kW of clean energy (enough to power the main hotellerie services on board). Because even minimal actions repeated many times can provide great benefits to the environment, SHERPA XL has low consumption devices and LEDlighting.

“The debut of the SHERPA XL is a very exciting moment for ARCADIA YACHTS,” concludes Ugo Pellegrino. “Today, with ten years’ ‘experience’, we can proceed with the natural evolution of our philosophy, reaching an increasingly larger audience that has understood the idea and the people who make up ARCADIA YACHTS ”.