Drawing inspiration from technologies seen in recent Americas Cup campaigns alongside Swiss engineering expertise, Enata’s vision to bring hydrofoiling capabilities to the leisure boating world made significant waves after the Foiler’s launch in February 2018. This came after 10,000 hours of pre-production testing to fine tune every aspect of the Foiler’s design. Since its debut, Enata has continued to invest in R&D for the Foiler, seeing its advances go from strength to strength and keeping it ahead of the pack in terms of design and technology.
The Foiler’s wings ingeniously absorb any unevenness on the water’s surface to create a perfectly smooth ride that is stable, comfortable and safe, even when crossing in the wakes of other boats. Passengers can wave goodbye to seasickness and the usual discomforts like back pain from bumpy boat rides, while keeping dry by eliminating the spray and splashes that usually accompany a journey on the water. 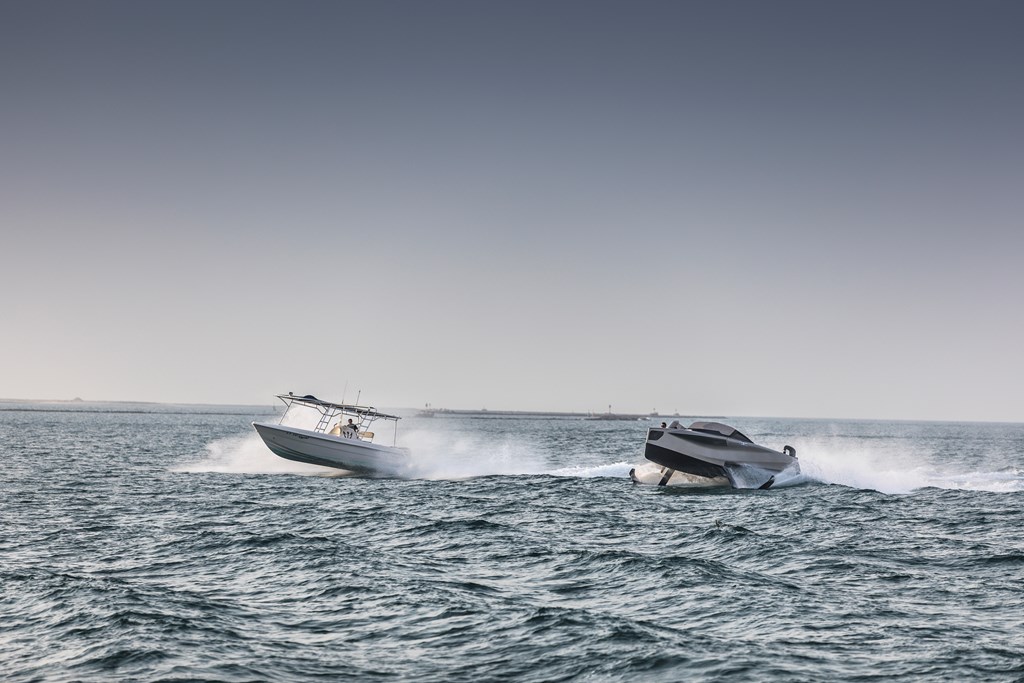 The Foiler difference in clear
When placed side-by-side with a conventionally designed boat, the Foiler difference is clear: no skimming, no slamming no rolling. Even at high speeds, in rough seas the Foiler ride remains smooth and comfortable, while passengers on the conventional boat are tossed about, with potentially harmful impact injuries on the back as well as a wet ride from splashes and sea spray.

Simple, intuitive joystick controls
One of Enata’s first progressions on the Foiler was to introduce a new joystick control, at a comfortable and conveniently-located pilot seat on the foredeck. The joystick delivers an instinctive driving experience like no other, which can be mastered in no time, while the convenient viewing windows at the forepeak of the yacht allow for the perfect driving view. 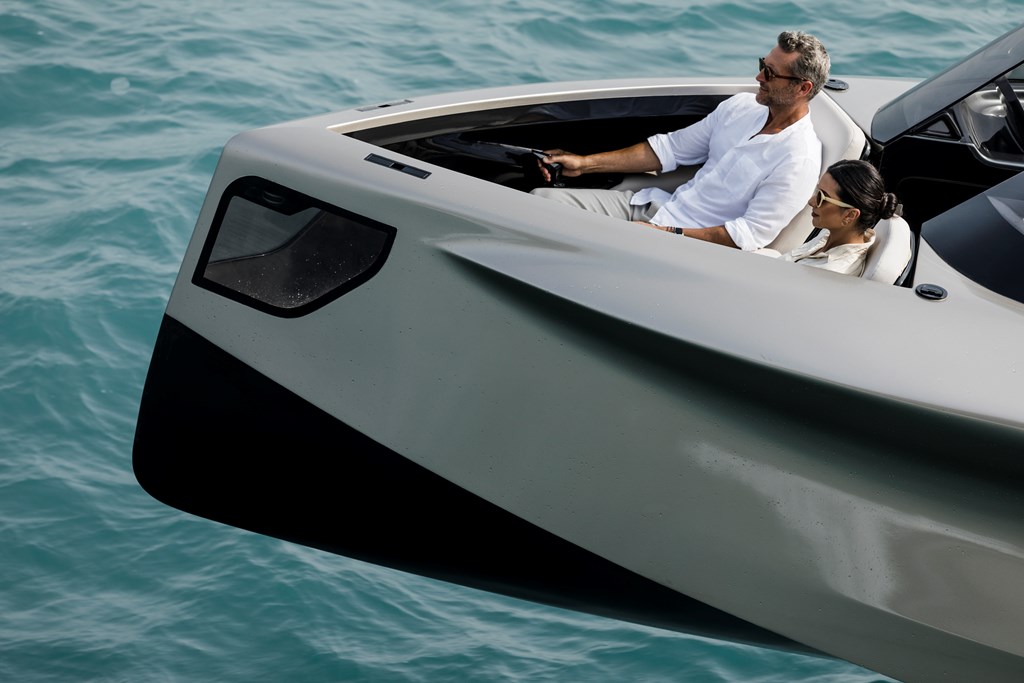 Advanced efficiency & propulsione tecchnology
The Foiler uses an industrial-grade hydraulic propulsion system that is reliable, durable and exceptionally quiet, powered by twin V8 marine diesel engines that deliver a total of 740hp. The drag of the torpedoes that power the Foiler has been minimised during hydrofoiling mode, resulting in a significant increase in speed and efficiency; it reaches top speeds of over 40 knots with lower thrust requirements than conventionally designed boats. 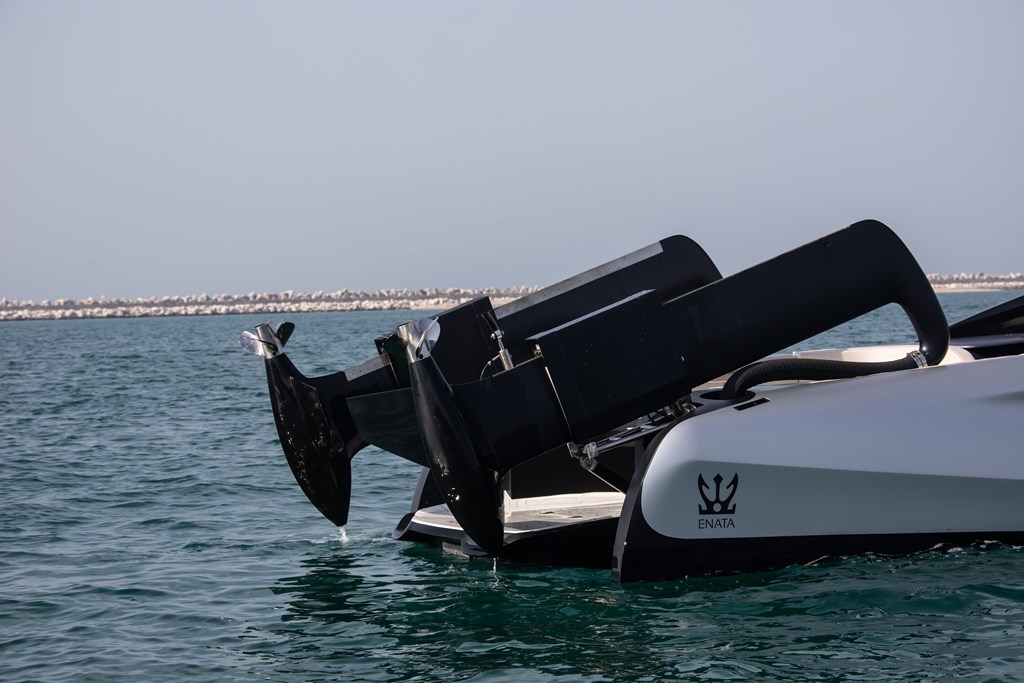 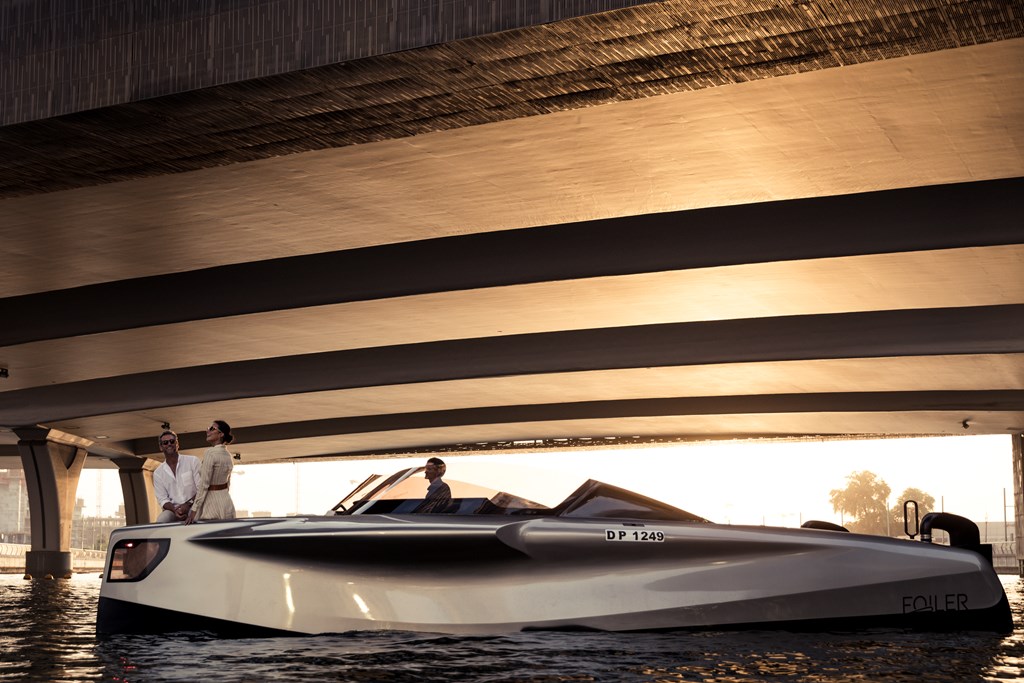 The Foiler is just as impressive in conventionally non-foiling, “Archimedean” mode as when it is raised above the water, too. At the touch of a button, the hydrofoils are completely retracted to rest in line with the yacht’s hull and the Foiler is able to venture into shallow waters with a depth of just 0.6m, or to dock at a pontoon or mothership superyacht. The transmission can be tipped to reduce the clearing height of the Foiler even further for stowage in a superyacht’s tender garage.

Active stability for a smoother ride
Following client feedback and ongoing R&D, Enata introduced a new feature to the Foiler in order to enhance comfort when underway: the active stability mode, which introduces some tilt to the yacht 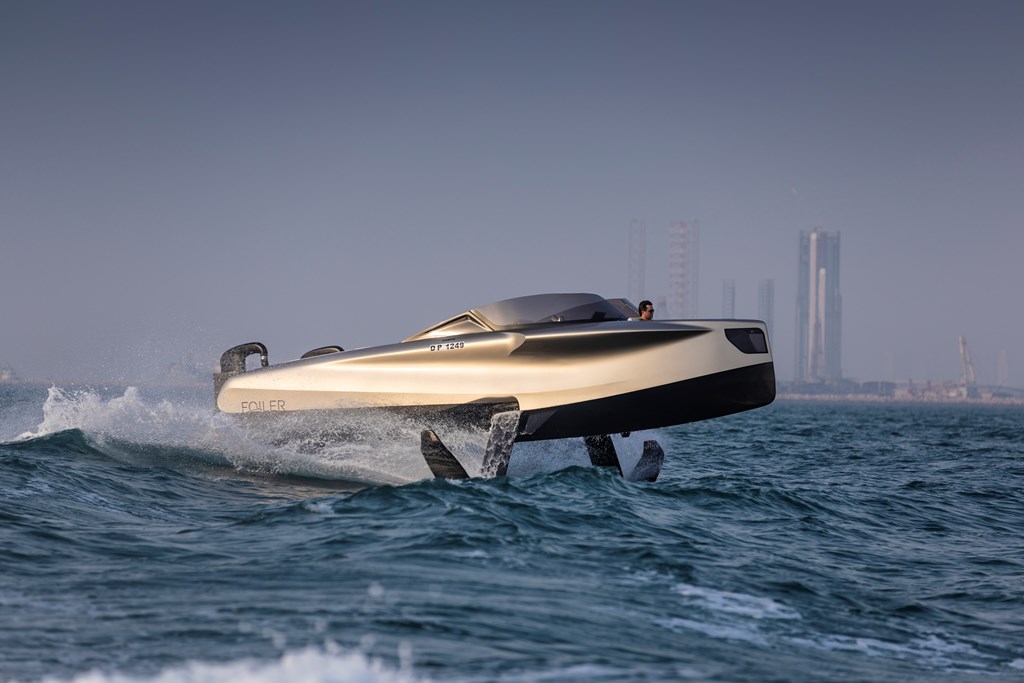 when turning in order to counteract any g-forces created, similar to the smooth, more even experience in a luxury car. For those who prefer a more raw, “sporty” sensation, the active stability mode can be turned off to put the Foiler in pure stability mode.

Smart sensors refine performance in real time
This year, Enata introduced 54 new smart sensors that are located across the Foiler, which pick up data including wheel positioning, port and starboard foil angles and pressure, exhaust temperature, and propulsion performance and stability indicators. All the Foiler’s features can be monitored and controlled through the centre console’s large touchscreen control panel or via Enata’s own “Wingman” control system. 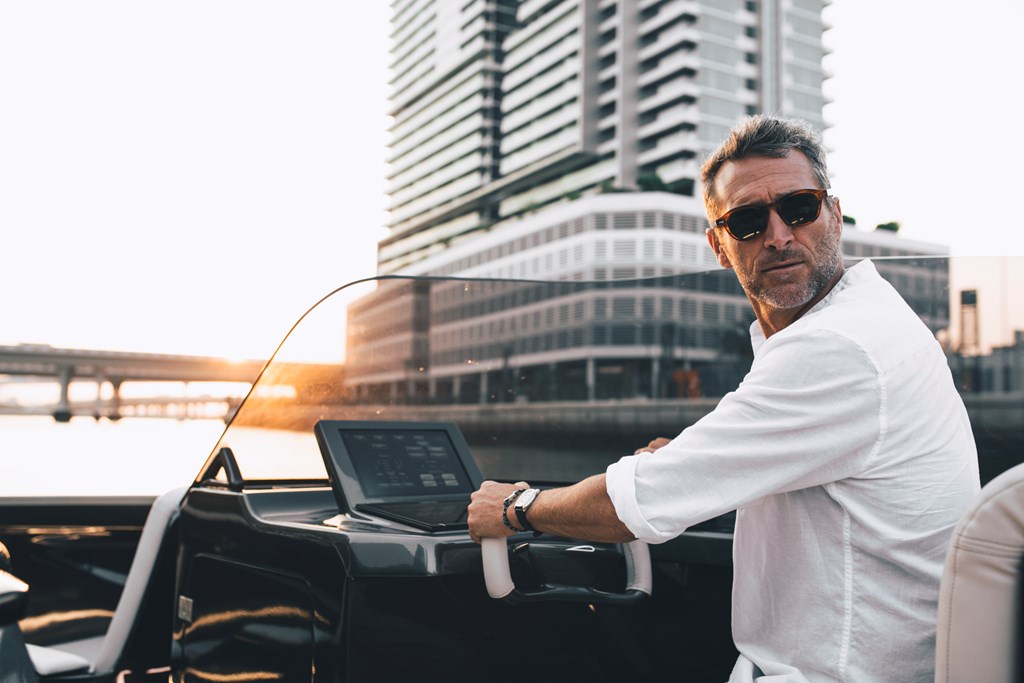 The data gathered by the sensors is then analysed by Enata’s proprietary artificial intelligence (AI) system in real time and through the Cloud, in order to make operational recommendations to the Foiler’s pilot that will optimise performance as well as prevent unnecessary wear and tear on the yacht.The system also allows the pilot to grant remote access to Enata ’s assistance team should any unexpected mechanical or technical problems arise on the Foiler, in many cases allowing them to fix an issue without physically being on board. 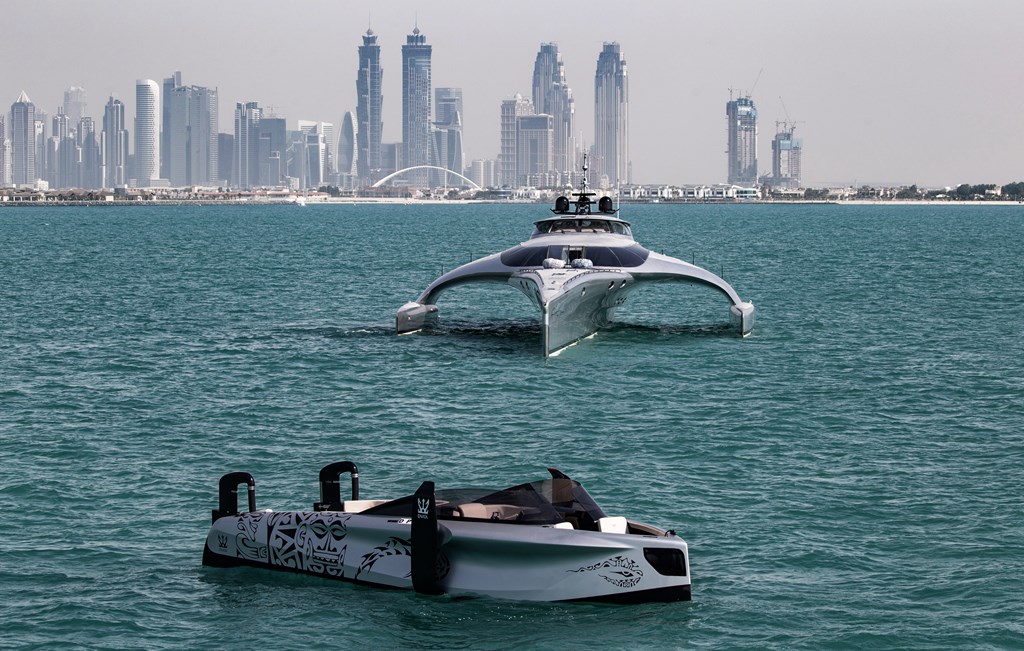 Technical knowledge and design innovations from Enata ’s award-winning aerospace division have heavily informed the engineering and design of the Foiler from day one. Moreover, Enata  upholds the same high-precision engineering, tolerance and fitness standards in its aerospace and marine divisions. The sharing of intellectual property alongside major investment into Enata ’s state-of-the-art facilities in the UAE have led to the development of features that are truly astonishing and previously unseen on a yacht of any size or category.