Following successful trials of one of the most significant sailing yacht launches of 2019, Baltic 142 Canova recently left Jakobstad to embark on a programme of global cruising, during which her numerous innovative design features will come to the fore.

Although Canova was built purely as a bluewater cruising yacht with the aim of operating for long periods without the need for specialist shore-side assistance, she is also designed as a powerful, fast and easy to handle sailing yacht. In addition, her owner is keen to reduce Canova’s environmental impact with reduced emissions through hydro-generation and electric propulsion.

Impressive styling
As she left the dock at Jakobstad the full effect of her lines could be appreciated. Styled by Lucio Micheletti, the superstructure’s long hard-top bimini, which extends from the deck saloon aft over the large guest cockpit, is a key feature. An engineering feat in itself, it incorporates touch button drop down side windows, sliding doors, ‘mood’ effect dimmable glass and the ability to take the 24-tonne load of the mainsheet track. 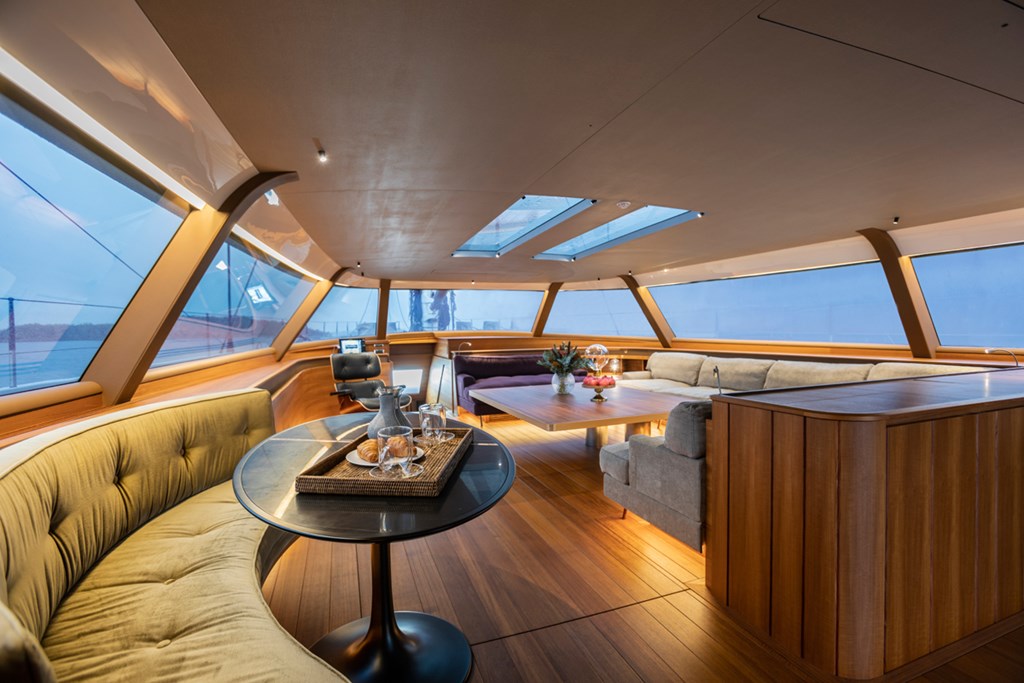 As can be seen in the accompanying pictures, Canova’s stunning interior, also styled by Micheletti, has recently received its finishing touches. It is a study in understated interior design with white bulkhead panelling and deckheads combining effectively with teak timber veneers to capitalise on the abundance of natural light.

Comfort a priority
Canova’s owner made comfort and safety for guests and crew a priority and to this end he decided to opt for a Dynamic Stability System foil, an athwartships sliding board set just below the waterline designed to reduce heel and dramatically dampen pitching motion in a seaway. 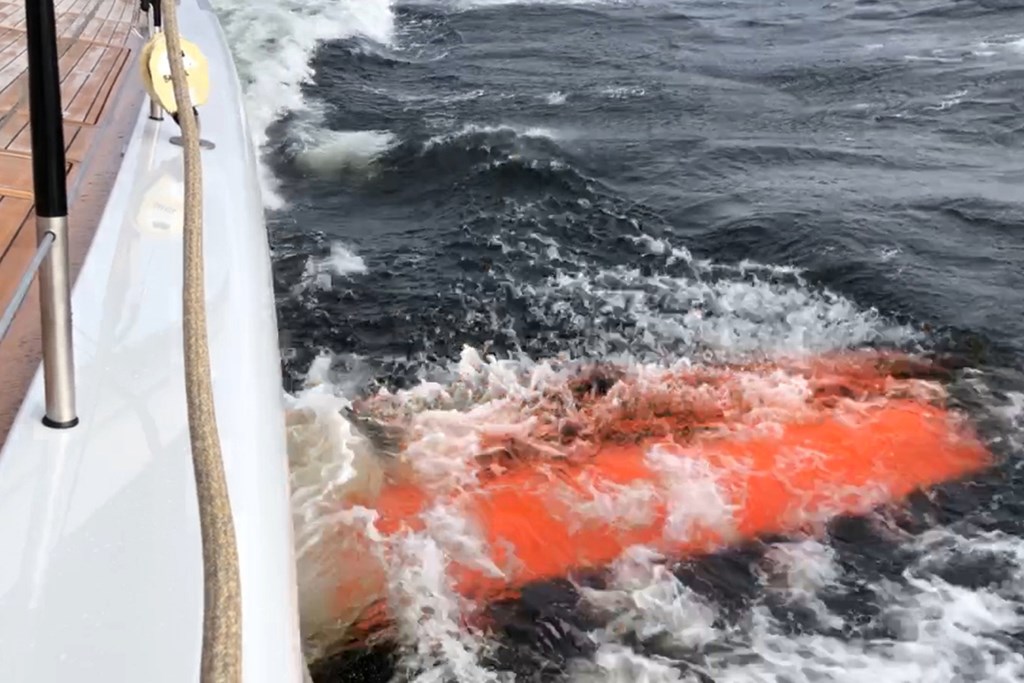 “I am very pleased to see that heel angle can already be reduced by 8 degrees in trials and there is plenty more fine tuning to come when we understand more about how to trim the yacht in conjunction with the foil,” said Canova’s owner. “The reduction in pitching motion is amazing. Any performance increase in terms of speed will be a bonus,” he added.

The design, engineering and construction of the DSS foil involved a large team coordinated by Baltic Yachts. Infiniti Yachts developed the foil, Ben Ainslie’s America’s Cup engineers BAR Technologies worked on the bearings and naval architects Farr Yacht Design, responsible for the overall design of Canova, worked with Gurit on the detail design and engineering and ISOTOP built the foil.

The 9m long foil is set in a cassette built into the bottom of the yacht, emerging just below the waterline around amidships. The foil runs directly beneath the owner’s cabin where its installation was made more challenging because the bunk itself can be adjusted to counteract heel angle. 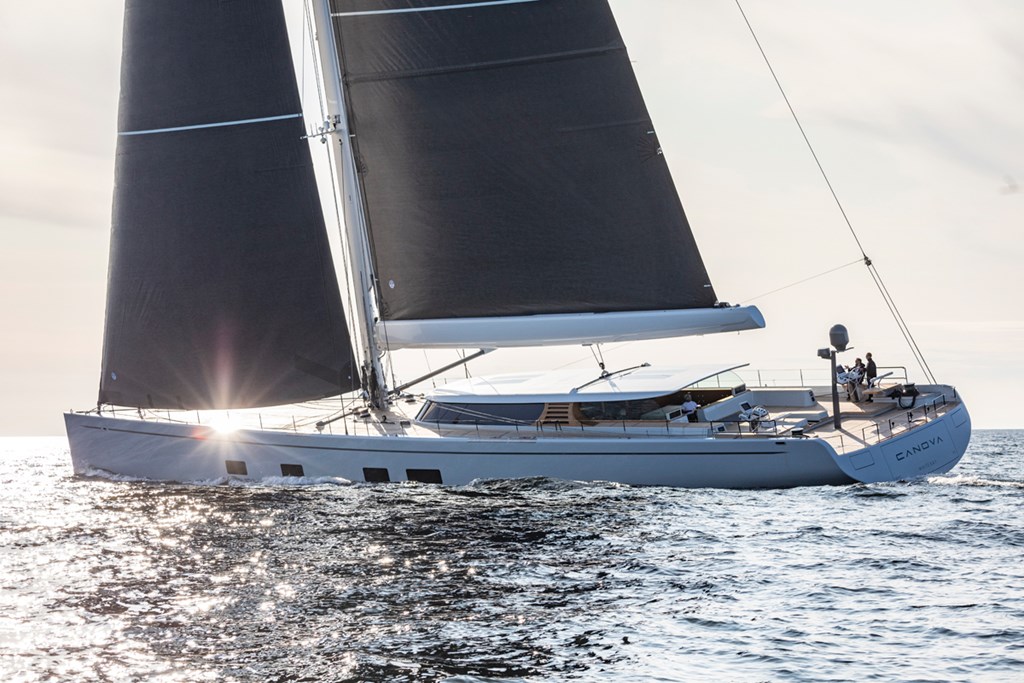 Electric propulsion and hydrogeneration towards sustainability
Comfort, economy and environmental considerations were also behind the decision to equip Canova with an electric propulsion system, a hydrogeneration system feeding a large Lithium ion battery bank and the means to run the yacht in ‘silent’ mode with all hotel systems running for up to nine hours. Daily charging can be reduced to just six hours.

Canova’s electric motor is remarkably compact and virtually silent in operation. It delivers 420kW and drives a forward facing pull propeller set on a saildrive-style leg which can be rotated through 340 degrees. There is no need for a separate stern thruster.

While the yacht is sailing, her free wheeling propeller drives the electric propulsion motor as a generator, which in turn charges the large bank of Lithium ion batteries. In the right conditions Canova could cross the Atlantic under sail using all her systems without recourse to conventional charging using an internal combustion engine. 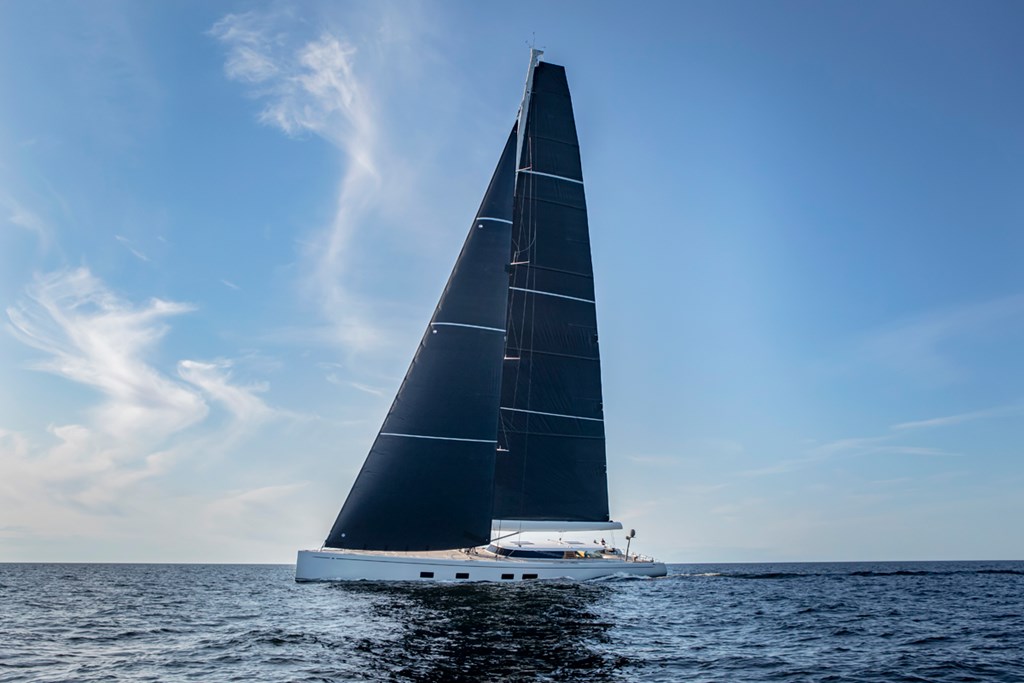 Powerful sailing yacht
Canova’s owner is a keen sailor. “I want her to sail, not motor sail!” he said, “but she has to be easy to handle for the crew so automated control was important.”  With her square top main and numerous headsail combinations she certainly has the potential, which combined with the effect of the DSS should produce a very effective performance. All her winches are electric with hydraulic systems reduced to a minimum. A self-tacking headsail means the yacht could, in theory, be tacked single handed.

Independent cruising
The owner’s bluewater cruising ambitions will be defined by Canova’s ability to remain largely independent of specialist support and to achieve this he wanted the yacht to be able to take her own weight sitting on her lifting keel in the raised position. This would avoid the need to be lifted and placed in a special cradle.

Other equipment that would normally require a lift for maintenance can be accessed and removed without the yacht being taken out of the water. The bow thruster is a case in point.

With nothing left to chance, Canova’s 7m custom tender is equipped with built-in tanks so that fuel bunkering in remote locations can be achieved.

Canova is a study in innovation for fast, comfortable, eco-friendly blue water cruising, engineered and built by Baltic Yachts who have worked with a wide range of external experts to bring the project to fruition.

We wish Canova, her owner and crew great sailing in great comfort! 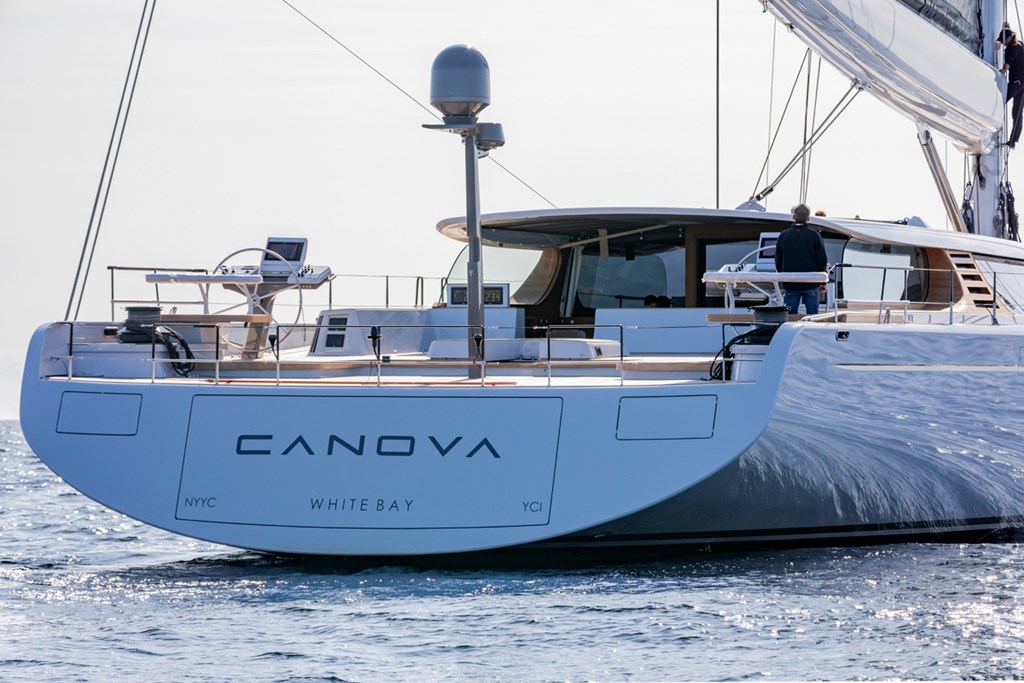