“An explorer yacht isn’t about its shape, it’s about its reliability, its range, its storage capacity and its ability to face any weather condition in comfort and safety,” says Vasco Buonpensiere, CdM’s Sales and Marketing Director. “We build cool explorer yachts, period. With an explorer yacht and a contemporary design, you have the best of the two worlds: you can cruise around the world comfortably/safely and in style. On the contrary, with a white yacht dressed like an explorer yacht (like many we see, lately), you just have a white yacht and your cruising lifestyle doesn’t change at all….” This statement synthesizes CdM’s approach to explorer yachting. 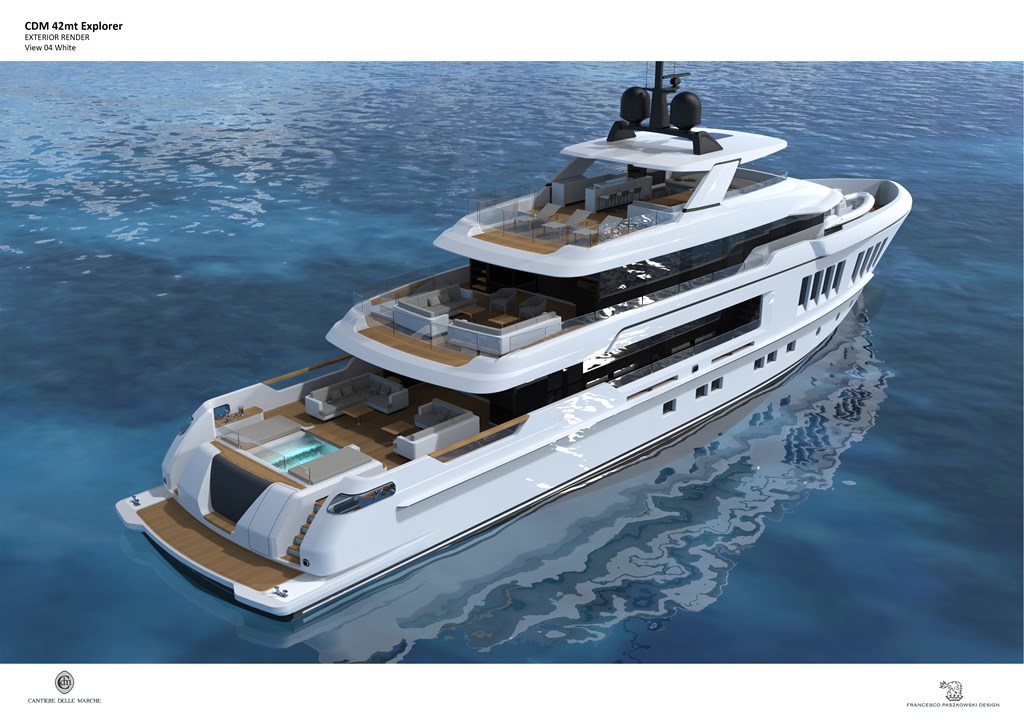 With the Darwin Class still playing the war-horse role, mastering the full custom segment with K42 Audace and Crowbridge (launched a couple of weeks ago) and more fully custom explorer yachts in the pipeline, CdM came up with new propositions in the semi-custom realm to meet a vast and demanding clientele needs and expectations. This is the case of the Flexplorer range by Hydro Tec (with the first Flexplorer about to be launched) and the MG line, by Francesco Paszkowski, of which three yachts have already been sold (MG 129 due
to be launched soon, and two MG 115 in build). 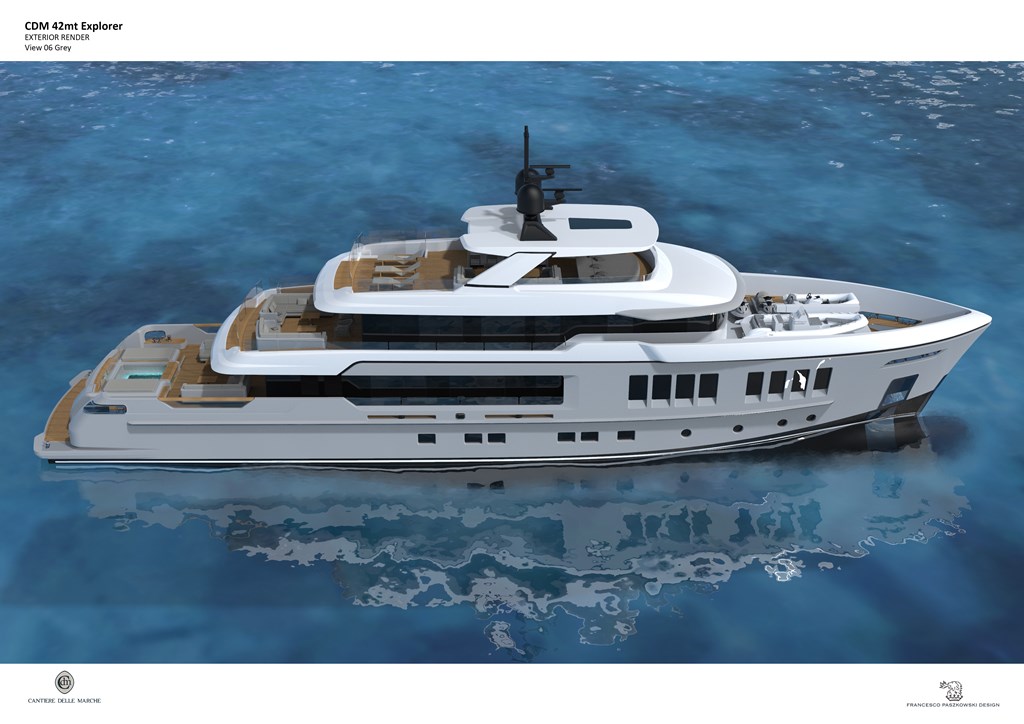 Pioneering and leading the explorer vessels’ segment required and requires a clear vision of the market and a proactive attitude, hence CdM’s decision to further extend and diversify its already rich offer with a new semi-custom range devised with Francesco Paszkowski, the EXP line composed by models from 310 to 499 GRT. We introduce you today the EXP 42 that perfectly summarizes all features and characteristics of the series she belongs to. Her exterior lines boasting an elegant, awe-inspiring beauty, will surely cast a spell on
all who will see her entering a marina in Cote d’Azure, Sardinia or all the most exclusive venues around the world. With the right equilibrium between comfortable interior living spaces and the build and technical reliability to take on the punishing seas, the EXP 42 have all characteristics that give her the confidence to sail head-on into remote destinations. 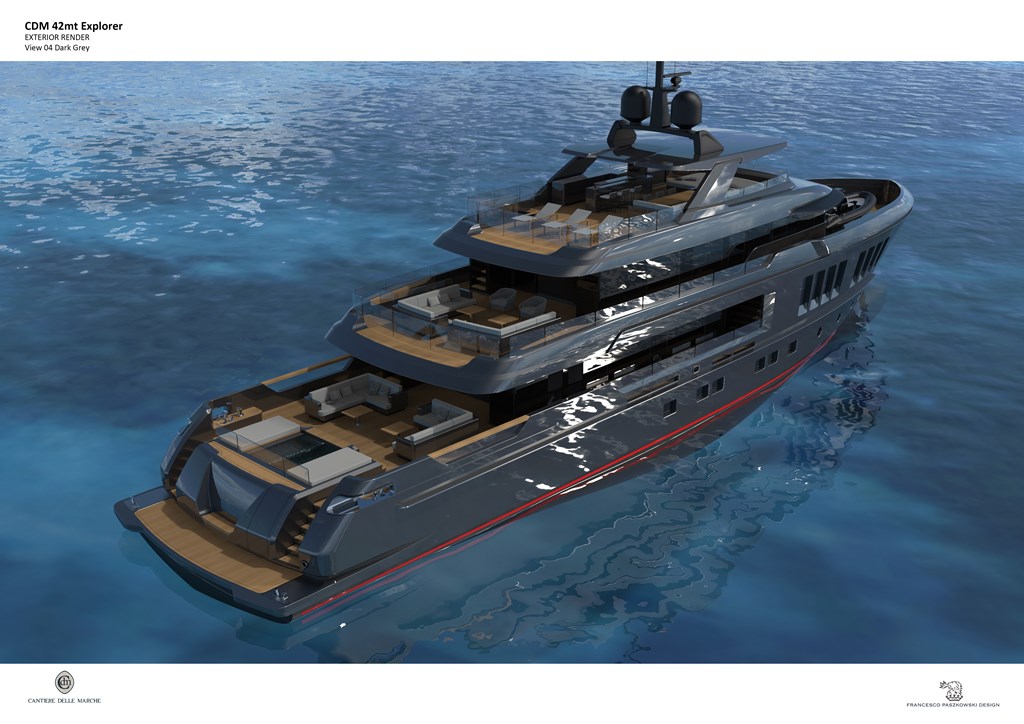 An imposing, bold explorer yacht, EXP 42 strikes a distinctive pose. With a robust and overengineered displacement steel hull and light aluminiun superstructure, the EXP 42 will have a displacement of around 460t. Twin Caterpillar C32 Acert and 60000-litre fuel tanks allow a top speed of 14 knots while a 5000nm range means she is able to sail far and wide with no need to stop for supplies. 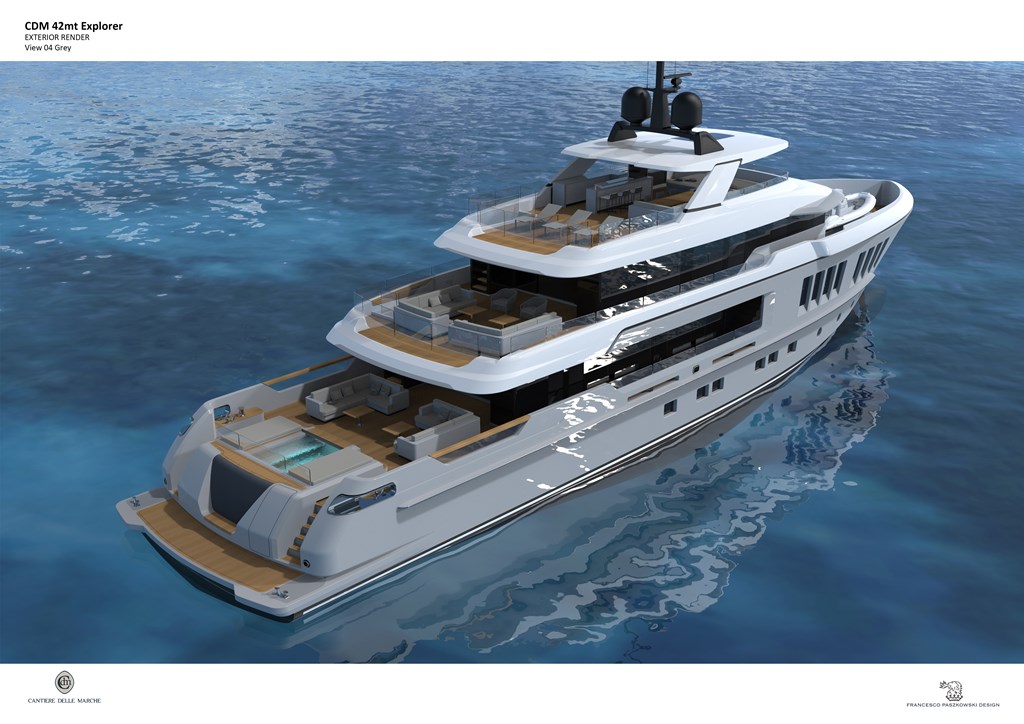 A pure explorer vessel, the EXP 42 has been conceptualized to house every imaginable guest feature one would expect from a luxury yacht. Paszkowski designed grand exterior deck spaces so guests can relax in a number of outdoor spots designed to offer maximum privacy while at the same time creating the feeling of openness and uninterrupted living spaces. 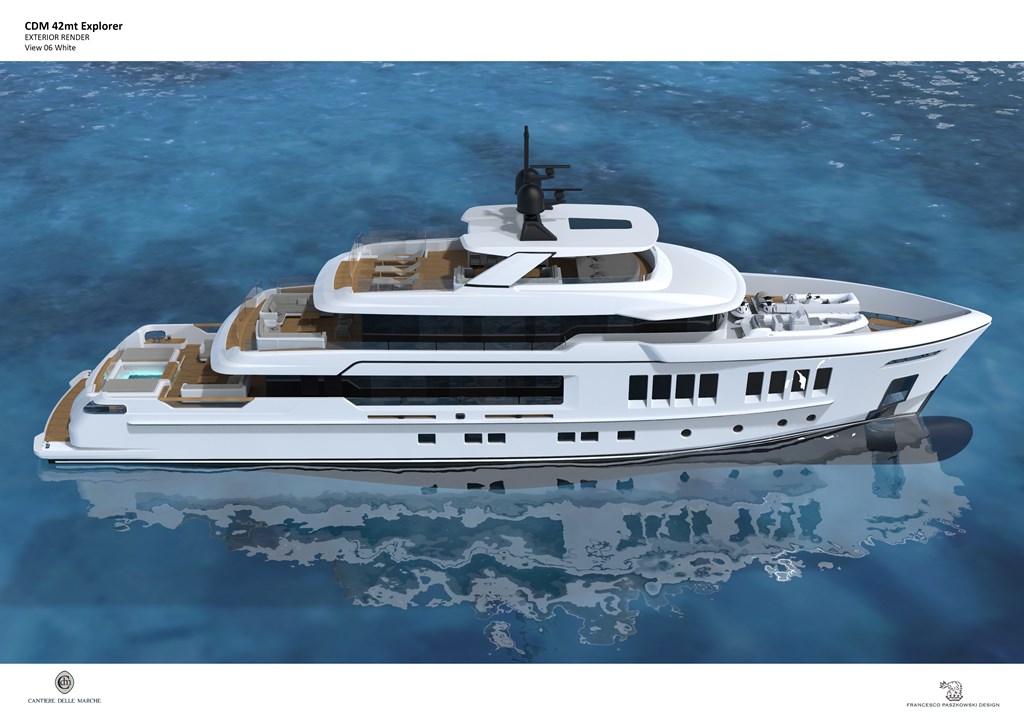 The interior layout can be highly customized according to each Owner’s needs and habits. Nevertheless, CdM offers a few options including a six guest cabins version, purposely designed for (one of the many) repeat client with charter in mind. In the first version all guest suites are basically of the same size. Four Vip cabins are located on the Main Deck while the remaining two guest suites are on the Lower Deck. 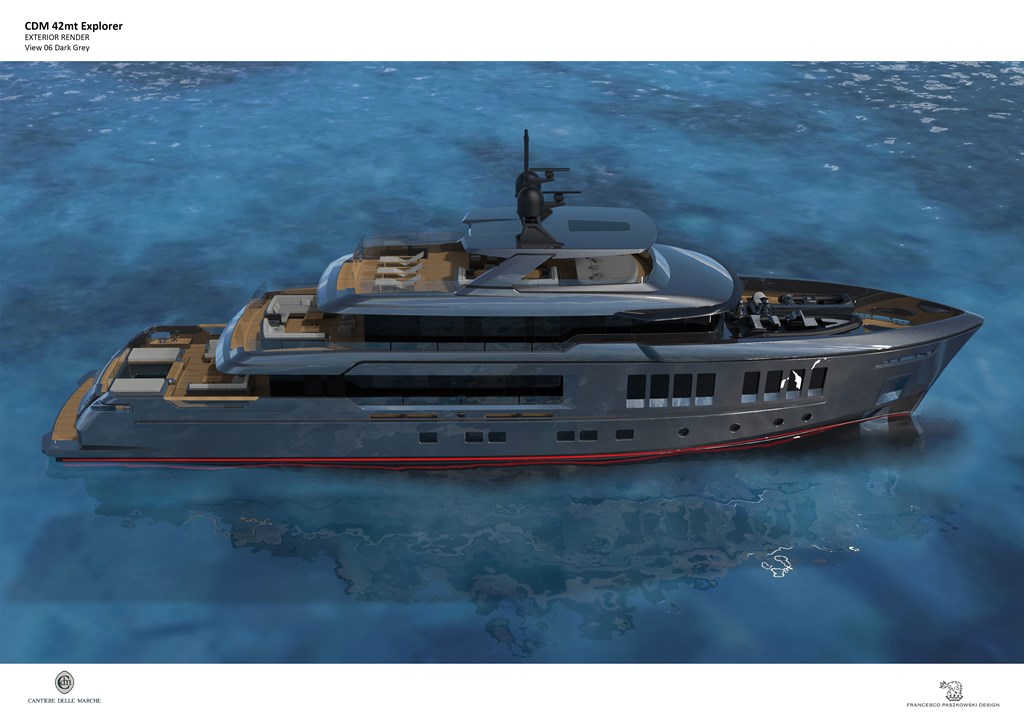 A more traditional layout, second version, features a large Owner apartment on the Main Deck forward and four guest suites on the Lower Deck. The interior layout is proposed in different configurations, with salon and dining area located on the Main Deck or with a smaller salon on the Main Deck and the dining area on the Upper Deck. In addition to interior versatility, the owner who prefers larger open decks’ areas can opt for a version with extended decks’ overhangs. But, as said before, these are just suggestions as the project is highly customizable. 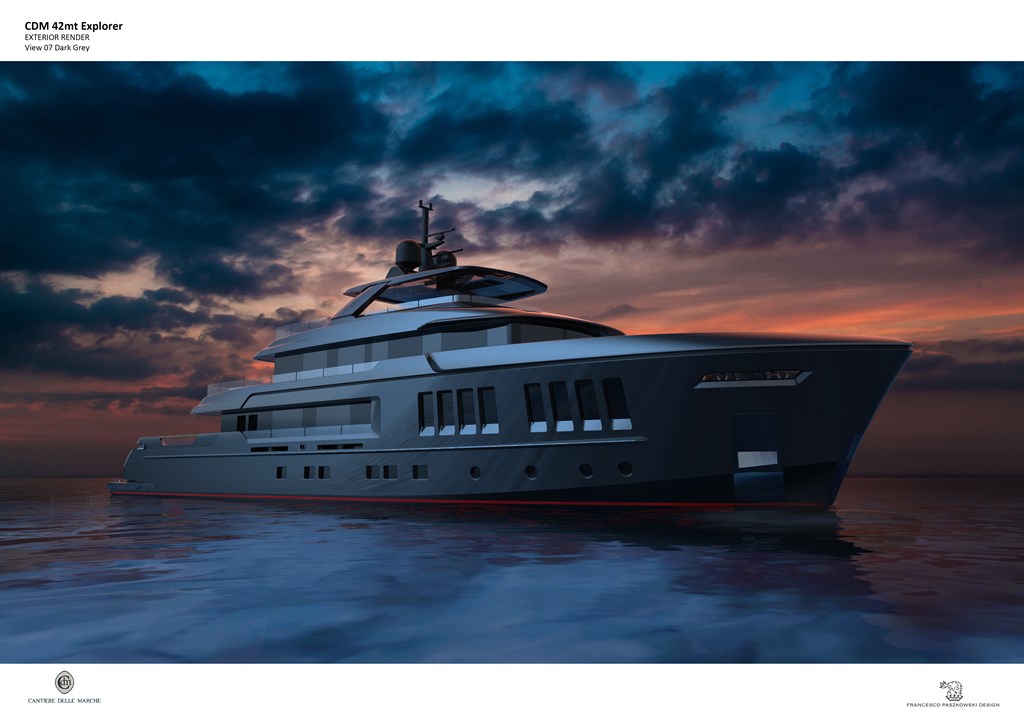 In the six guest cabins version we can find a big and functional galley on the same level of the immense crew quarters: all of this without compromising anything as far as the VIP areas are concerned. The more traditional layout has the galley located on the Main Deck, almost amidship. As this is a yacht designed to be used often and for long spans of time away from shore, storage is indeed everywhere on board. Among EXP 42’s key features, worth a mention an extremely large cockpit with fold-down balconies and the Upper Deck salon that best shows off the indoor/outdoor ethos of this project. The upper salon is a bright and airy veranda wrapped in glass surfaces to enhance the continuity between the outdoors and the comfortable interiors so no matter what time of year the owner is cruising, even if it’s not nice enough to venture outside, he can enjoy a direct connection to the sea. 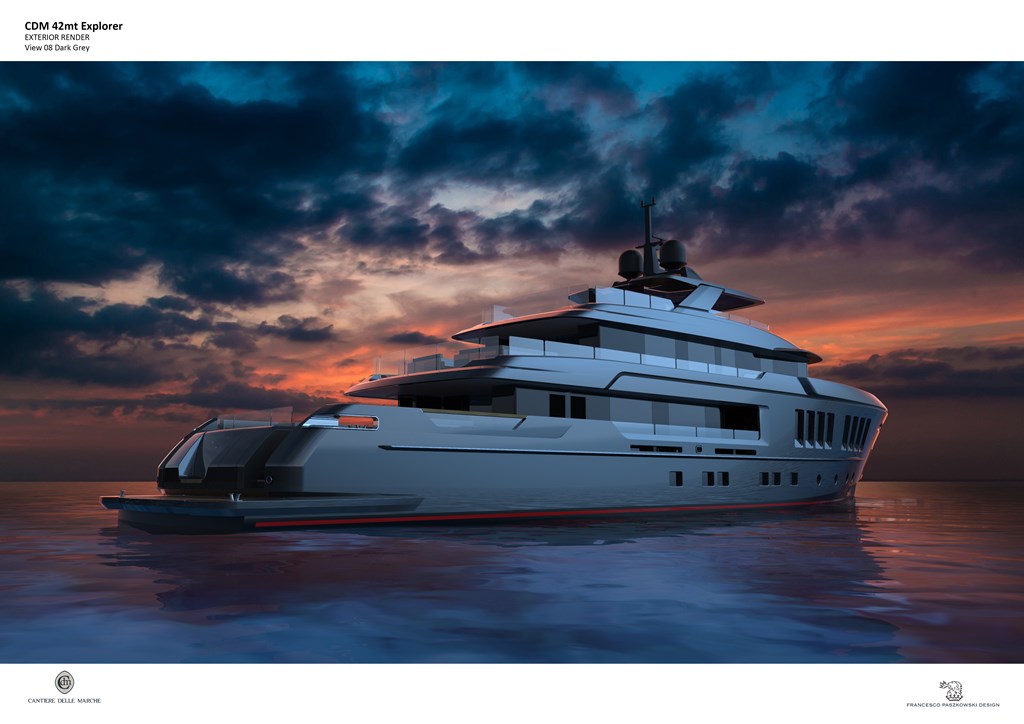 The main salon boasts almost the same level of brightness thanks to purposefully oversized windows. Large vertical windows mark the main deck forward section. They provide lots of natural light inside the yacht while adding a peculiar character to her overall design. Tender and jet skis are hosted on the Main Deck forward but, at request they can be stored on the Uper Deck stern terrace. In this latter configuration, a crane is hidden in a purposely designed carter on the Sun deck to keep it out of sight once the tender has been launched. 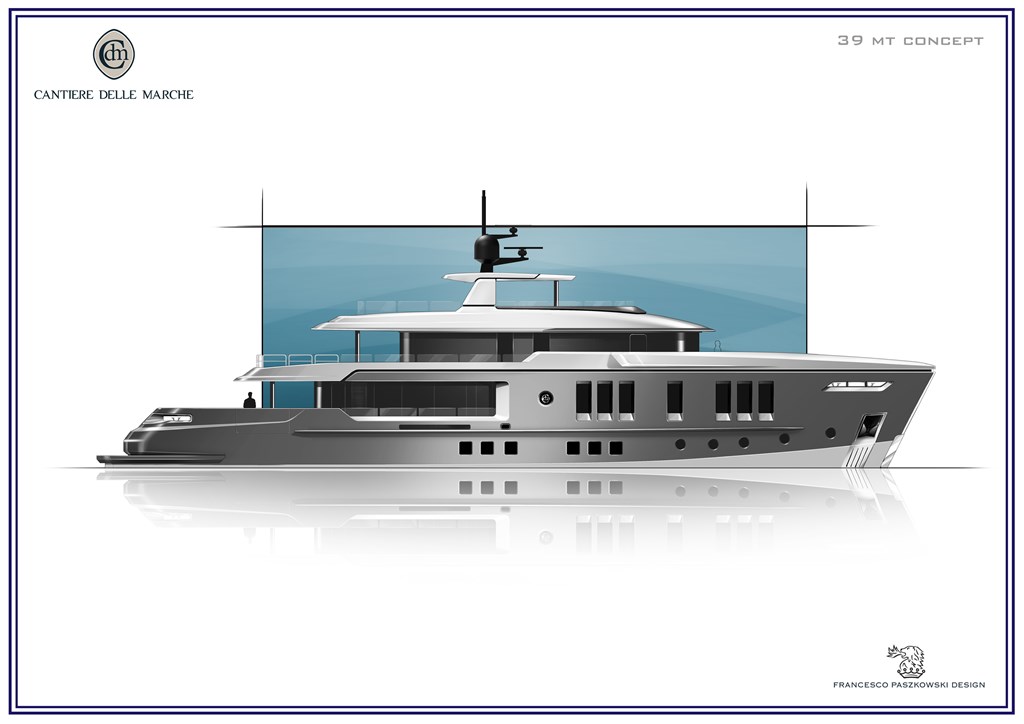 On the Lower deck, the engine room is a showpiece, as on all CdM’s yachts. Big and extremely functional, it is a feather in the cap of CdM. The yard prides itself to create as much redundancy as possible as for equipment and on over-engineering its yachts. EXP 42 will be no exception. A large lazarette is available to host all sort of leisure equipment, a gym or to be arranged according to each owner’s wishes.