The concept behind AJ Benetti 50 metre was to create a superb floating beach house with expansive deck spaces that melt into the Bannenberg & Rowell interiors. A modern yet never modernist aesthetic.

Benetti’s FB803 will henceforth be known as AJ. Built on spec by the yard, she was sold just before the start of the summer to an Australian owner but little will change in terms of her essence: she will remain a 50-metre that cleverly marries large al fresco spaces with extreme privacy.

The fact that her sun deck offers around 140 square metres of space also comes as a very pleasant surprise, as do the stunning views from an area meticulously designed to be used all day long, thanks to a 12-seater dining area, an American bar, a Jacuzzi forward and an aft rectangular glass-walled pool which seems to meld with the surrounding sea. The sun lounge on the upper deck is also very spacious, offering guests a secluded and sophisticated hideaway with sofas, armchairs, sun beds and a large terrace that draws the eye forward.

The fact that the designers strove so hard to create an intimate bond with the sea is clear everywhere aboard AJ with as many visual barriers to the outside world swept away as possible. Hence the meticulous use of glass, large openings and the choice of light, slender tubular steel rails that disappear into the views around them. The sauna in the beach club has a wonderfully theatrical and unusual window overlooking the water-skimming platform.

AJ’s naval architecture and exterior design were done entirely in-house by Benetti. Her livery is a mix of taut horizontal lines and a sharply raked bow that scream energy, power and character.

The interiors, on the other hand, were created by Bannenberg & Rowell of London. The design is both modern and sophisticated with classical overtones. A mix of white oak, hammered walnut detailing, brushed spruce is flanked by silver Travertine and Eramosa stone. Light and dark hammered bronze, pale silver and etched mirrors lend the interiors a timeless allure.

Bannenberg & Rowell worked with the very clear aim of creating the ambience and atmosphere of a classic beach house. The result is that the saloons on the two decks are big, bright and airy. They feel like a cool, gleaming cocoon of sorts that surrounds the soft, curving furnishings which are in natural colours with contrasting dark accents. The result is warm, chic and very welcoming spaces.

Forwards on the main deck is a full-beam apartment devoted entirely to the owner. Its 60 square metres of space are flooded with light and span an office, two walk-in closets, two bathrooms (with hydromassage and shower) and a six square metre private balcony accessible through a sliding door even underway. In the lobby, a spiral staircase leads to the lower deck and the guest cabins, which include two VIPs.

The London studio custom-designed beds, bedside tables and coffee tables but has mixed in a selection of Minotti designer sofas, armchairs and seating in the saloon on the main deck, plus Arketipo sofas and a Poltrona Frau table on the upper deck.

The flows aboard were carefully worked out to create separate walkways for crew members on the various decks with their accommodation spread over five cabins on the lower deck. The privacy of owner and his guests has been prioritised to the utmost and they can enjoy cruising aboard this sophisticated displacement yacht at 14 knots for up to 4,000 nautical miles in absolute peace and quiet. 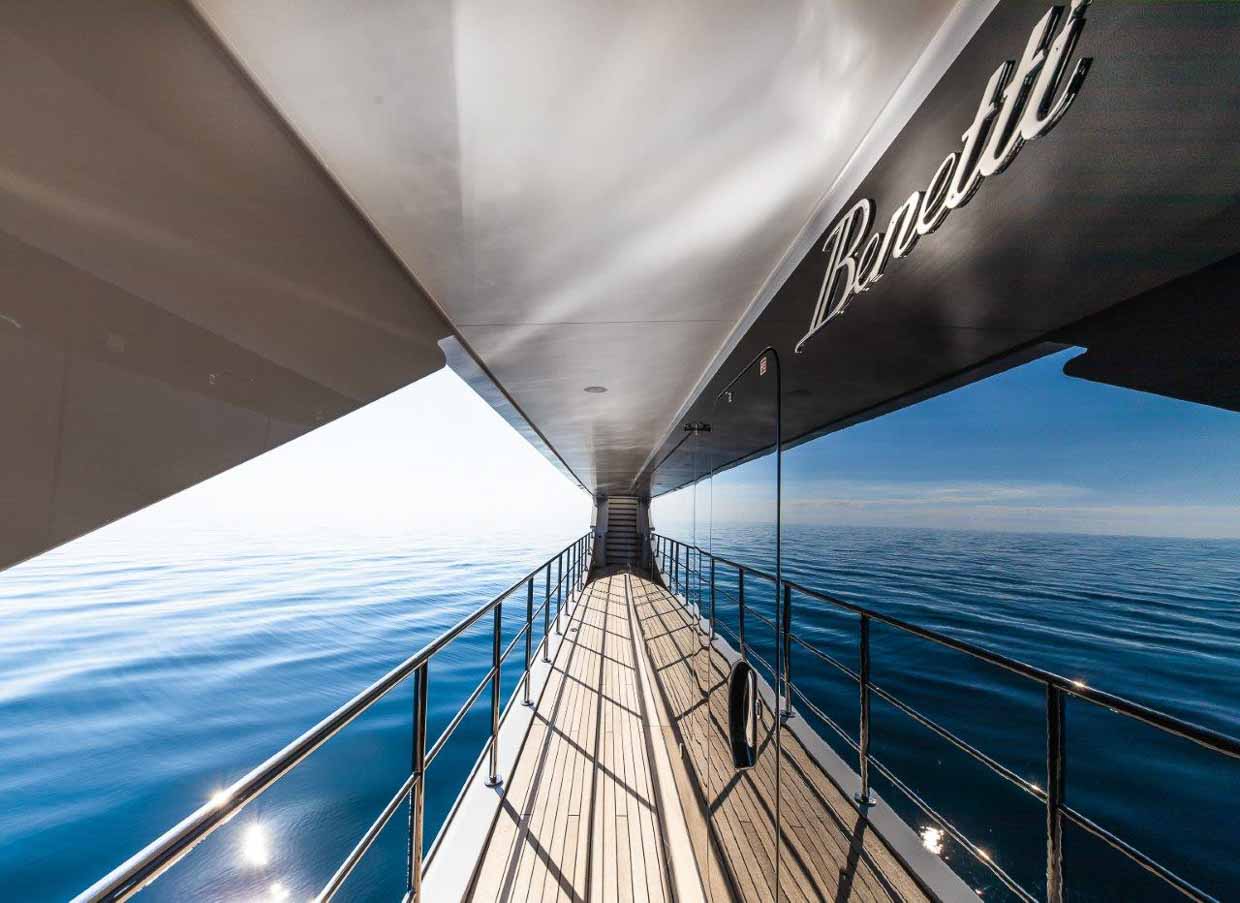 The aim with this yacht was to strike just the right balance between allowing those on board a completely sublime cruising experience and immersion, and the comfort and privacy a yacht of this type has to offer. Our decision was to make this a floating beach house from which guests could enjoy the outside world 360°, by reducing to a minimum the visual obstacles on the main and sun decks in particular while still giving those aboard plenty of privacy.

AJ Benetti’s signatures are without a shadow of a doubt her large exterior relaxation areas, the panoramic Jacuzzi forward on the sun deck, the glass-walled pool aft on the same deck, and the large rectangular table in the open area aft on the upper deck. The same can be said of the area in front of the steering position on the upper deck. AJ’s lines reference Benetti’s classic lines which have always been the embodiment of both luxury and speed. The FB 800 series does, however, very definitely introduce a new Benetti stylistic language. Taut horizontal lines lend the exterior surfaces both an identity all of their own and a sense of dynamism while creating large spaces and expansive views from the interior. Many elements have been freshened up with functional ideas which have become aesthetic solutions showcased in the profile. The project, which began life in 2012, incorporates Benetti DNA, but in an evolved form. The upper decks offer levels of both versatility and freedom which are still unique in the category.

We were engaged directly by Benetti to design the interior for this project which was built on spec. They gave us the freedom to come up with an interior concept.
As with all our projects, we looked to create a sophisticated contemporary feel, but one that remains approachable and liveable. We used a largely natural palette with accents of indigo, smoky grey and tan.

As regards light, first and foremost, we avoided designing a dark interior! We were careful with the design and selection of window treatments and window reveals: layered lighting schemes.
We really wanted to add texture and interest to this interior and this can be seen woven into the design throughout: in the hammered walnut detailing, brushed spruce, horn accents, grasspaper. I think they combine well to give a lot of depth, subtly applied, to the interior.

It is a relatively conventional layout for a yacht of this size, but well planned with a successful connection with the exterior spaces, including a private balcony to the starboard side of the Owner’s Suite.
We custom-designed several items aboard, including the beds, beside tables and coffee tables but for the rest we used a variety of different companies. We are not overly reliant on any particular brands – if you are, your work soon becomes predictable. Some of the manufacturers on board include John Hutton, Minotti, Ben Whistler, Holly Hunt and Sutherland.

My favourite area aboard? I like the detailing in the guest cabins: mid-century-inspired bedside tables, the integrated desk drawers and the gentle contrast of the hammered walnut circles in the doors. My favourite pieces, which are also probably the most iconic, are the custom-designed lacquer and stainless steel coffee tables.

AJ is a Mediterranean-style yacht with lots of exterior spaces and large aft decks. Her strengths include two pools on the sun deck, plus a staircase that connects the lower and upper decks – something normally only seen on larger craft. Additionally, the master cabin is particularly large thanks to the fact that the GRP hull delivers large volumes to play which also assure great elegance. The richness of the materials used and the superb standard of Italian craftsmanship in the details are the main factors that make AJ an instantly recognisable Benetti.

Her large full-height windows – the latest fashion – also lighten her lines and draw more light into the saloons and the cabins.
Like her sisters (FB801 and FB802), AJ (FB 803) was designed to come in at under 5,000 GT despite being 50 metres in length. Her GRP hull and aluminium superstructure meant we could design spacious interiors that deliver both comfort and privacy, as well as generous exterior spaces.

The GRP and aluminium also reduce vibration transmission, guaranteeing comfortable cruising even at maximum speed.
If I had to think of three adjectives to describe AJ Benetti, I would start with “original”. The charm of her superb highly personalised Made in Italy-style interiors brings us to the second, which is “flexible”. The skilful work done by the artisans who worked aboard has produced functional but sumptuously comfortable interiors and exteriors. The third adjective I would use to describe AJ is “high-performance” – and once again this is down to the GRP and aluminium. 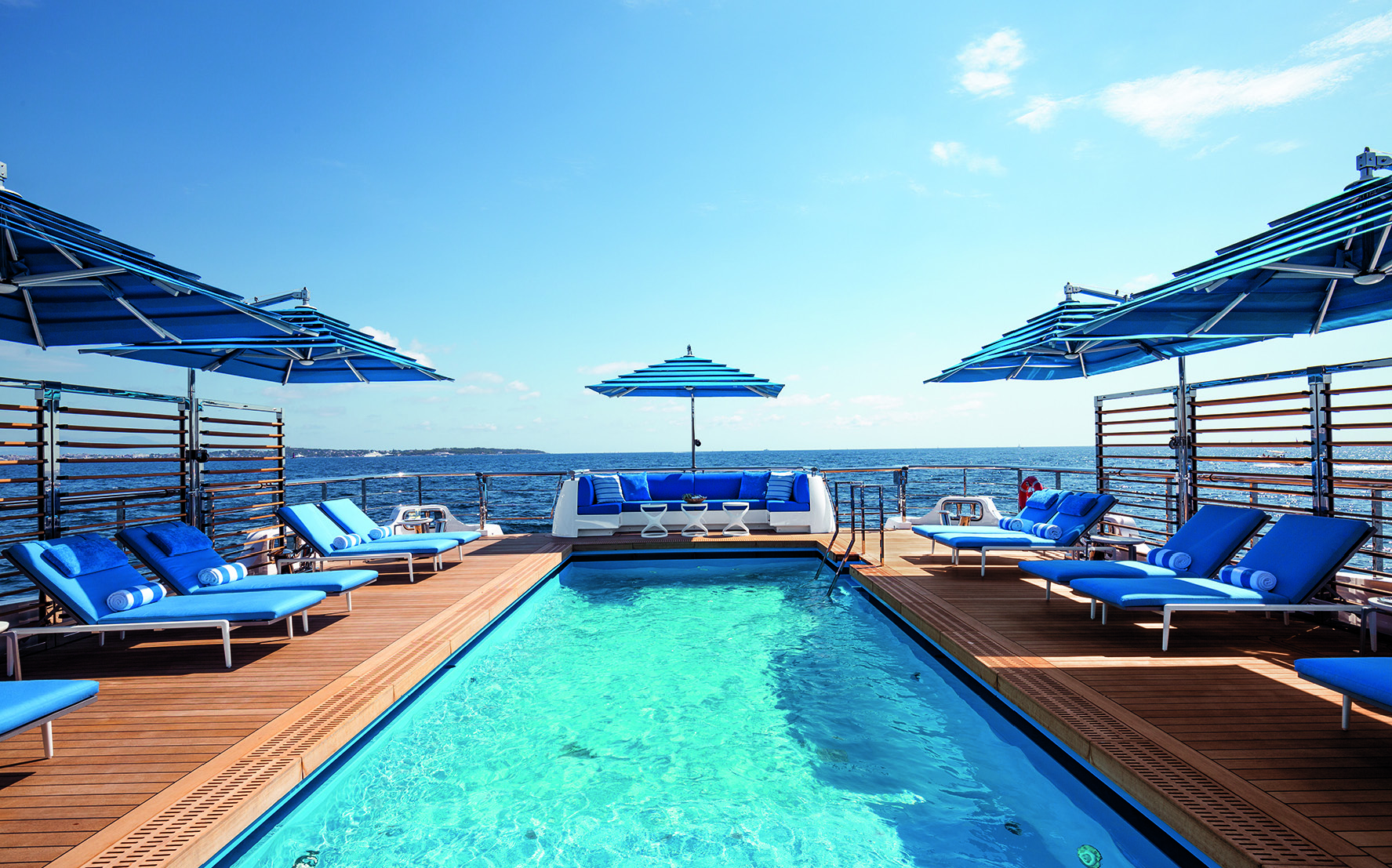 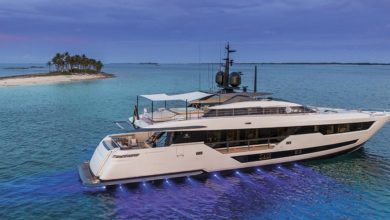 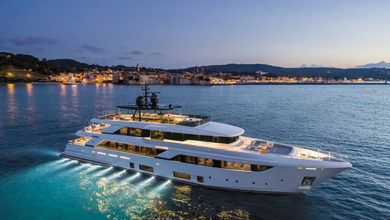 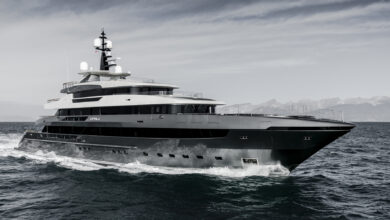